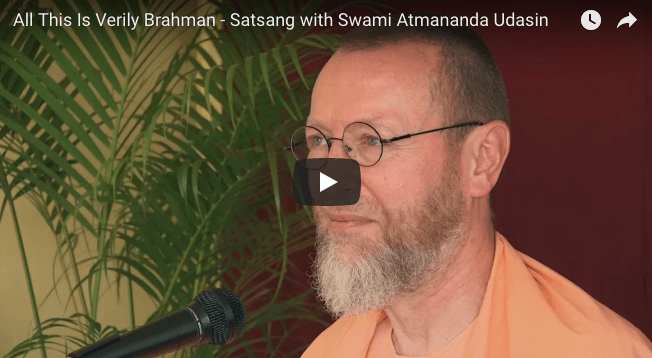 Satsang is a word which comes from Sanskrit, meaning “to associate with true people “, to be in the company of true people – sitting with a Satguru, or in a group meeting seeking that association. Inner Satsang is to raise the consciousness to a level of realization that soul (Atma) and Lord (Parmatma) are One.

This is the very first Youtube internet video recording of Swami Atmananda Udasin as he explores the quintessence of the Advaitic teachings in a series of talks delivered to a group of spiritual seekers at the feet of the holy mountain Arunachala (Tiruvannamalai).

Luckily he opened his Ashram to the public for in 2014 and we were blessed to have stumbled across this by chance after being drawn in to see what Satsang was all about. We regularly visit the Ajantananda Ashram in Rishikesh to hear the beautiful, direct pointing’s from the unreal to the real by Swami Atmananda. We now realize that is was Grace that called us there.

We hope this touches you as deeply as it has us. Satsang Season starts again in Rishikesh, the home of Cotton Conscious and a magnet for spiritual seekers, in 2018 (please see dates below). Namaste

Swami will be holding Satsang in Ajatananda Ashram in Rishikesh:

Daily Open Satsang (Not on Thursdays and Fridays)

Daily Evening Meditation (Not on Thursdays and Fridays)

Daily Open Satsang (Not on Thursdays and Fridays)

Daily Evening Meditation (Not on Thursdays and Fridays)

Designed in London and handmade in the foothills of the Himalayas. Cotton Conscious are a Fairtrade, ethical & organic clothing label. Slow fashion, sustainable dresses are made in naturally dyed, handwoven & hand block printed, 100% organic cotton. As a conscious shopper, when buying natural lifestyle clothing from Cotton Conscious you are directly supporting small family-owned businesses & underprivileged communities in Rishikesh, India.

If you have any inquiries about any of our products on the website or ordering with Cotton Conscious please contact us below.